The football team of JSC Aeromar was founded in the 1990s. like-minded people of one company, impartial enthusiasts of real men's football. Aeromar FC is represented by the team at Sheremetyevo Airport and participates in games among other airports in the country, as well as in competition with the international airports of Munich, Vienna, Nice, Malta, Lyon, London, Krakow, Frankfurt, Dublin and others.

The main achievement of the team is the promotion of a healthy lifestyle, the development of sports ties and the establishment of a positive image of Aeromar.

Over the past 5 years, the football club has participated in many tournaments, including international ones.

In 2012, our team participated in the European Championship among airports, which was held in Malta, and took the honorable II place.

In 2013, FC Aeromar football players won the Lobnya championship, took part in the AVIALIGI Cup in Turkey and took third place in the tournament of the Aeroflot OJSC trade union.

In the following year, 2014, the football club won the futsal tournament dedicated to the 25th anniversary of Aeromar JSC, and took the third place in the tournament of the Aeroflot OJSC football union. If we talk about sporting events of an international level, then in the XVI European Football Championship between airport teams held in Krakow (Poland), our team became a silver medalist.

In 2015, the Aeromar football team took part in the DLFL spring championship (Dolgoprudnensky Amateur Football League) in Dolgoprudny, taking, after the results of the competition, an honorable II place. As part of international sports and events, from October 4 to 11, 2015, in honor of the 50th anniversary of the legendary CSKA captain Dmitry Kuznetsov, the “24th International Football Festival” was held in Turkey, in which our team took part and won a hard victory taking second place. In the autumn of the same year, the DLFL 2015 autumn championship ended in Dolgoprudny, following which Aeromar FC took second place.

2016 was also full of sporting events: the team became the championship champion of Dolgoprudny and Lobnya; in the main tournament of the season - the European Airport Football Championship held in Vienna, Austria - our football club III place; Aeromar football players also won the tournament cup of the Aeroflot OJSC trade union and took part in the Champions League of the Moscow Region, where they became a bronze medalist.

At the beginning of 2017, the team participated in the championship tournament in Dolgoprudny and took the III place, as well as in the sports contest of the enterprise in Khimki, where it won the II place in the football tournament. In May of the same year, a tournament was held dedicated to the 25th anniversary of the flight attendant service of Aeroflot airline, as a result of which our football club became the winner.

Currently, football players of FC Aeromar participate in the championship of Lobnya, in which they occupy an intermediate first position. Training and friendly matches are also being held, which are preparations for the Russian Open Championship among air traffic controllers and airlines, which will be held from September 23 to September 30, 2017 in Belek (Turkey). 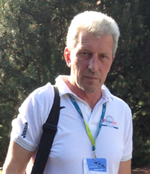 In 2013, the team was transformed. The changes also affected the coaching staff: by the joint decision of the players, the coach of the national team was appointed the outstanding and experienced professional Bogdanov Alexander Vasilievich, who repeatedly showed high results and demonstrated undeniable tactics of the game. Thanks to the efforts of Alexander Bogdanov, the team has earned and repeatedly occupied honorable high places in tournaments and competitions of the international level. The main position of Alexander Vasilyevich in JSC “Aeromar” is a loader of a delivery service. Thus, Alexander Bogdanov combines two positions - a loader and a senior coach of the national team.

In addition, the composition of the team, mainly represented by the employees of the Delivery Service and SkyShop Product Accounting and Movement Workshop, was updated and replenished with new young players.

Every week, on Fridays, the Trud stadium in the Krasnaya Polyana microdistrict (Lobnya) hosts training on an artificial field, where all those who would like to become a member of the team are invited to watch.